The main features of the "Tutti Frutti method" which has allowed reaching the 6PN level of accuracy (modulo a few still unknown parameters) in the relativistic treatment of the two-body system will be briefly introduced and discussed. Special attention will be devoted to the gauge-invariant information encoded in the scattering angle of hyperbolic-like encounters.

2. února 2021
Kinetic simulations of black-hole magnetospheres
Mr. Benjamin Crinquand
Institute of Planetology and Astrophysics, University of Grenoble Alps
(seminář v angličtině)
A variety of astrophysical phenomena can only be explained as being powered by black holes. In particular, accreting supermassive black holes are responsible for launching relativistic plasma jets and for accelerating ultra energetic particles. The mechanism that channels energy from the black hole to the particles remains a mystery. Observations have come to help lately. The Event Horizon Telescope collaboration has been able to image the shadow of the supermassive black hole M87*, suggesting that it might be spinning. The GRAVITY collaboration detected a hot spot in infrared orbiting Sgr A*, indicating the presence of a large scale poloidal magnetic field. These observations give new clues to constrain theoretical models that are able to explain jets and particle acceleration. This problem involves complex interactions between collisionless plasma dynamics in high gravitational field, and pair creation due to the interaction of energetic particles with surrounding photons from the accretion flow. Only kinetic simulations can capture all these effects. In this talk, I will present General Relativistic Radiative Particle-in-Cell (GRRPIC) simulations of an axisymmetric black hole magnetosphere, embedded in a soft background radiation field. These simulations use newly developed radiative transfer techniques. They show for the first time the development of a time-dependent electromagnetic cascade, which could explain the high variability of high-energy emission from Sgr A* and M87*, and plasma loading at the base of relativistic jets. I also show how these simulations can be used to synthesize observables (lightcurves, images), bridging the gap between theory and observations. 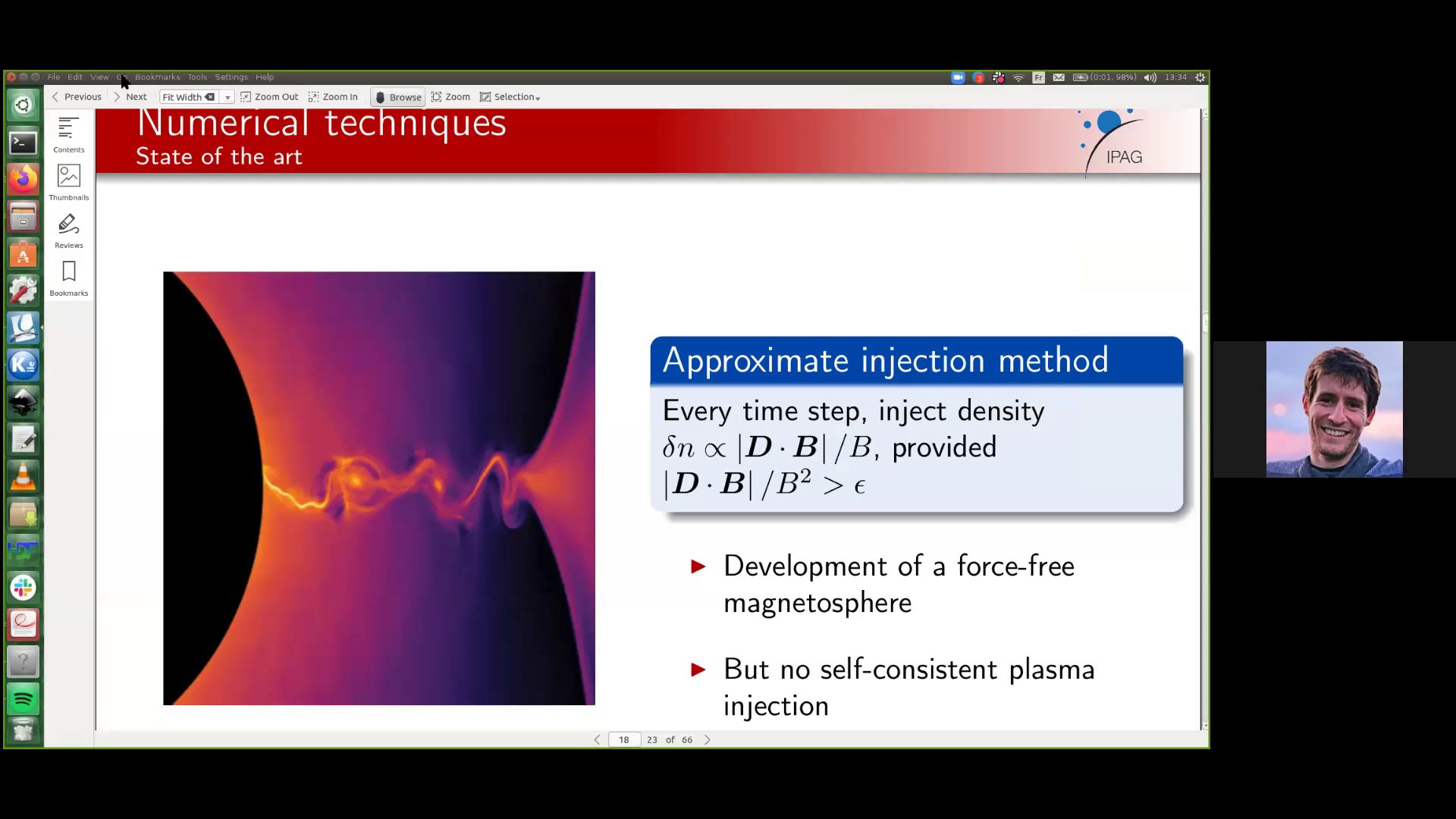 The central supermassive black hole of the Milky Way, Sgr A*, accretes at a very low rate making it a very underluminous galactic nucleus. Despite the tens of Wolf-Rayet stars present within the inner parsec supplying 1e-3 Msun/yr in stellar winds, only a negligible fraction of this material (<1e-4) ends up being accreted onto Sgr A*. The recent discovery of cold gas (~10,000 K) in its vicinity raised questions about how such material could settle in the hostile (~10 MK) environment near Sgr A*. In this work we show that the system of mass-losing stars blowing winds can naturally account for both the hot, inefficient accretion flow, as well as the formation of a cold disk-like structure. We run hydrodynamical simulations using the grid-based code RAMSES starting as early in the past as possible to observe the state of the system at the present time. Our results show that the system reaches a quasi-steady state in about ~500 yr with material being captured at a rate of ~1e-6 Msun/yr at scales of ~1e-4 pc, consistent with the observations and previous models. However, on longer timescales (>~3000 yr) the material accumulates close to the black hole in the form of a disk. Considering the duration of the Wolf-Rayet phase (100,000 yr), we conclude that this scenario has likely already happened, and could be responsible for the more active past of Sgr A*, and/or its current outflow. We argue that the hypothesis of the mass-losing stars being the main regulator of the activity of the black hole deserves further consideration. 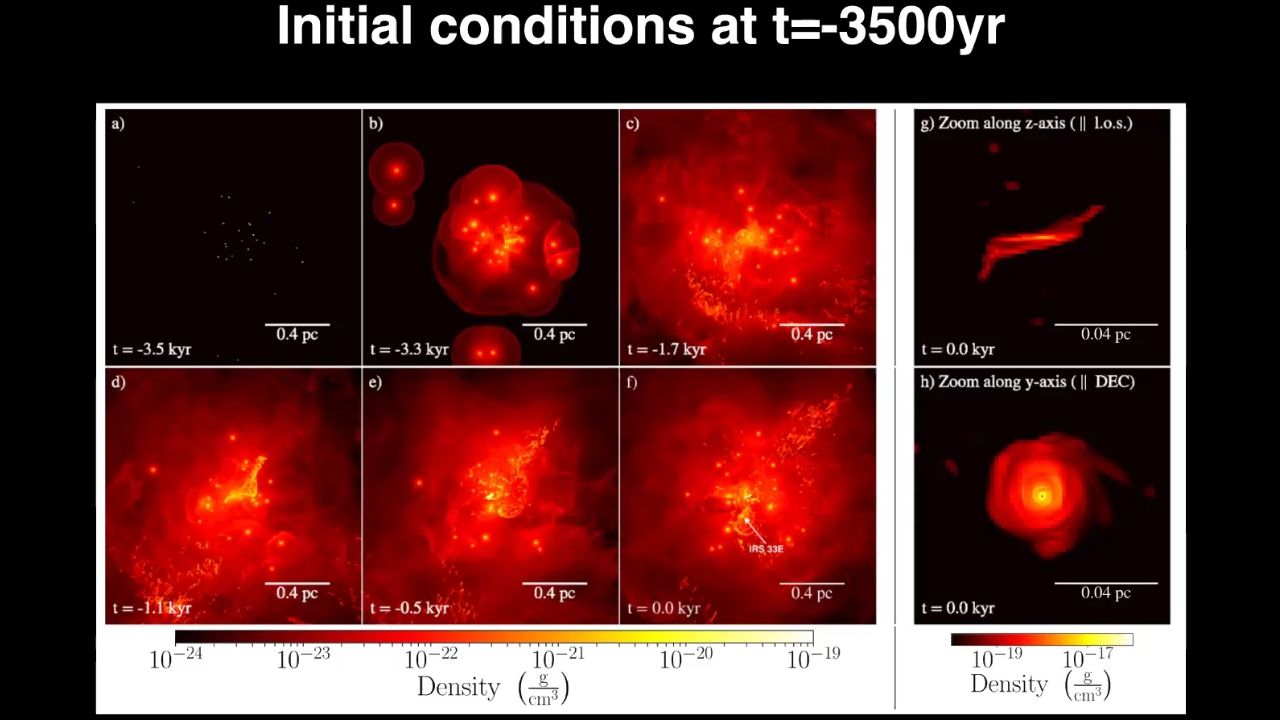 Bondi's celebrated mass loss formula measures the rate of change of energy carried away from an isolated system (in asymptotically flat space-time) by gravitational radiation. In this talk, we discuss the mass loss formula for linearized gravitational fields in covariant phase-space formalism. We also generalize this idea to the de Sitter setting. Based on arXiv:2003.09548 [gr-qc] (https://arxiv.org/abs/2003.09548). 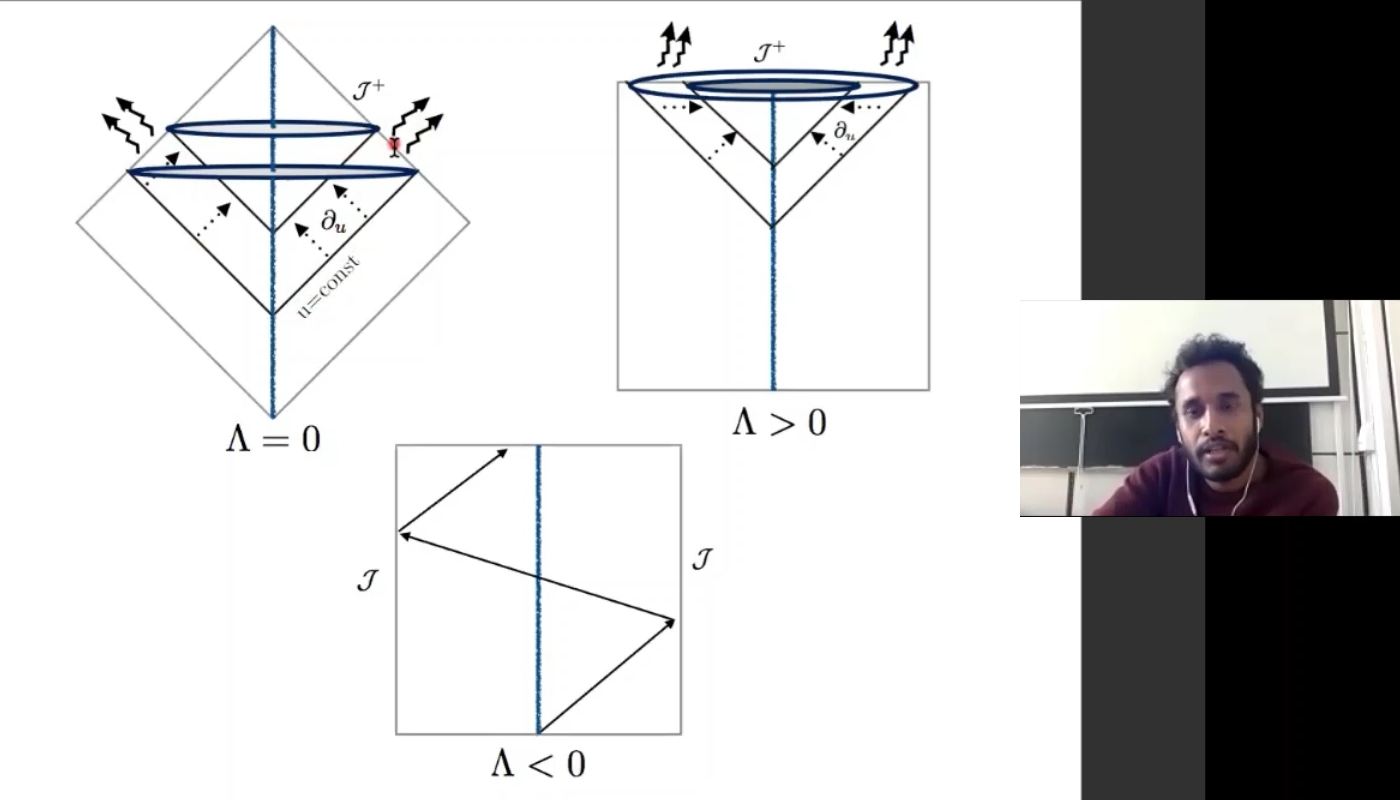 During the last two years, three discoveries in the Galactic center have opened up new horizons for its research. First, it is the discovery of faint fast-moving stars that reach the speed of a fraction of the light speed at their pericenters, with S62 and S4711 having orbital periods less than 10 years and S4714 potentially reaching nearly 10% of the light speed. Second, the finding that stars of the innermost stellar cluster (S cluster) form two nearly edge-on, perpendicular stellar disks, in which they rotate in both directions. Finally, the population of infrared-excess, dust-enshrouded objects hints at a very recent star-formation event potentially less than a million years ago in the vicinity of Sgr A*. Alternatively, they could be binary merger products, which points towards a complex stellar dynamics in one of the densest stellar clusters of the Milky Way. All of these findings have important implications for the Galactic Center past dynamical evolution and its star-formation history. 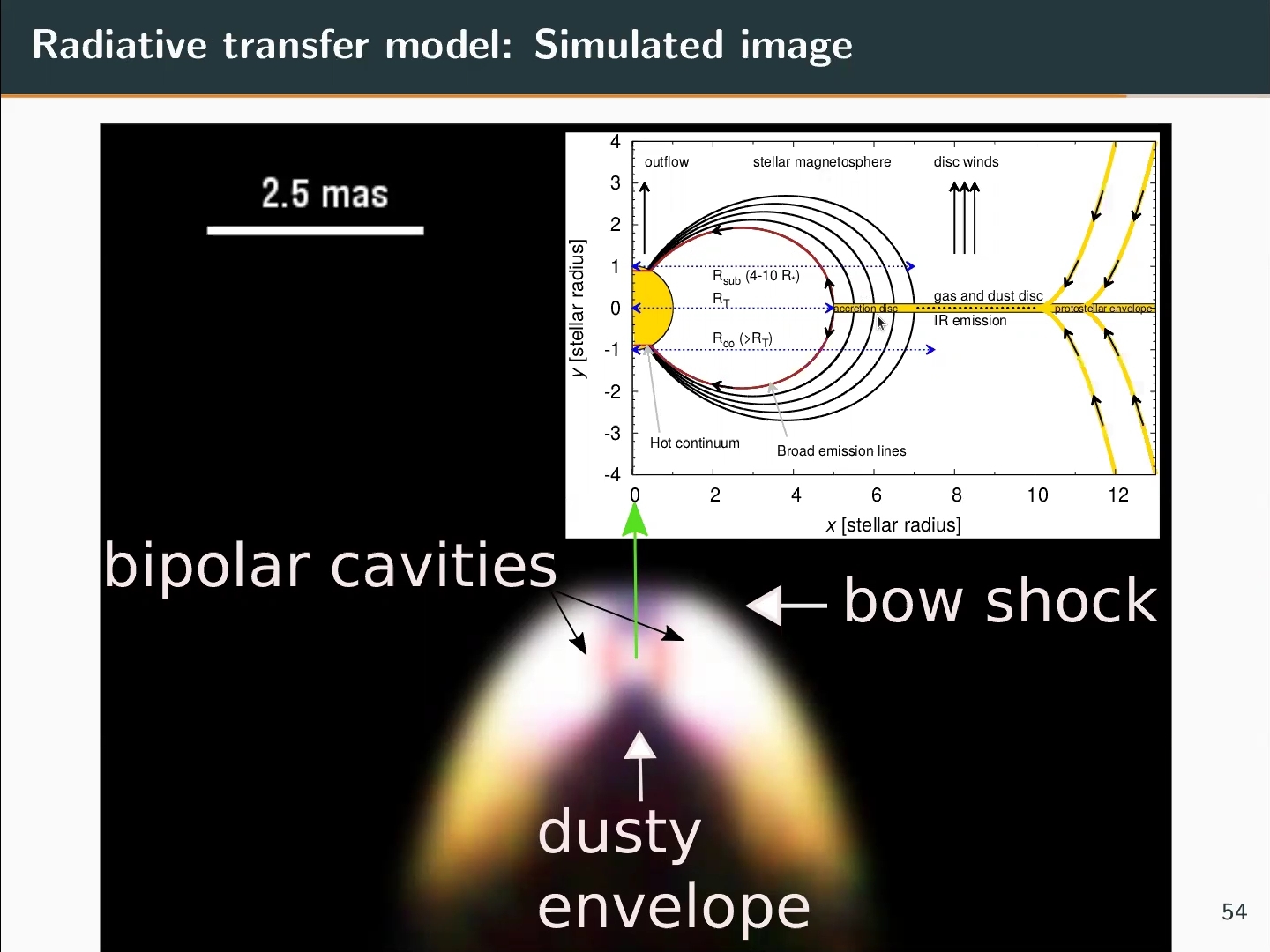 Black hole physics has always provided a fascinating lens for phenomenology and fundamental questions alike. Personally, I always felt particularly drawn, on the one hand, to quantum field theoretic aspects of this. On the other hand, I take great pleasure in linking various physical and mathematical observations across fields—the basic idea behind the analogue space-time paradigm. In this talk, I will present our work in both of these subfields of relativity. On the side of black hole physics, particular focus will lie on how the Hawking effect is mildly misrepresented when described as black body radiation. A natural question to ask of analogue models, then, is whether this curious property is retained in the evaporation of an analogue black hole. While investigating this, we were led to an important and often overlooked distinction of how an analogue space-time analogue can be formulated. As an example for this, I will construct two very different kinds of analogues from electromagnetism in media. One of the oldest analogues turns out to be encumbered by numerous subtle and intricate issues of cartography. Although this spells trouble for use as a general relativistic analogue, I propose a way to turn this into a stepping stone towards analogues beyond general relativity. 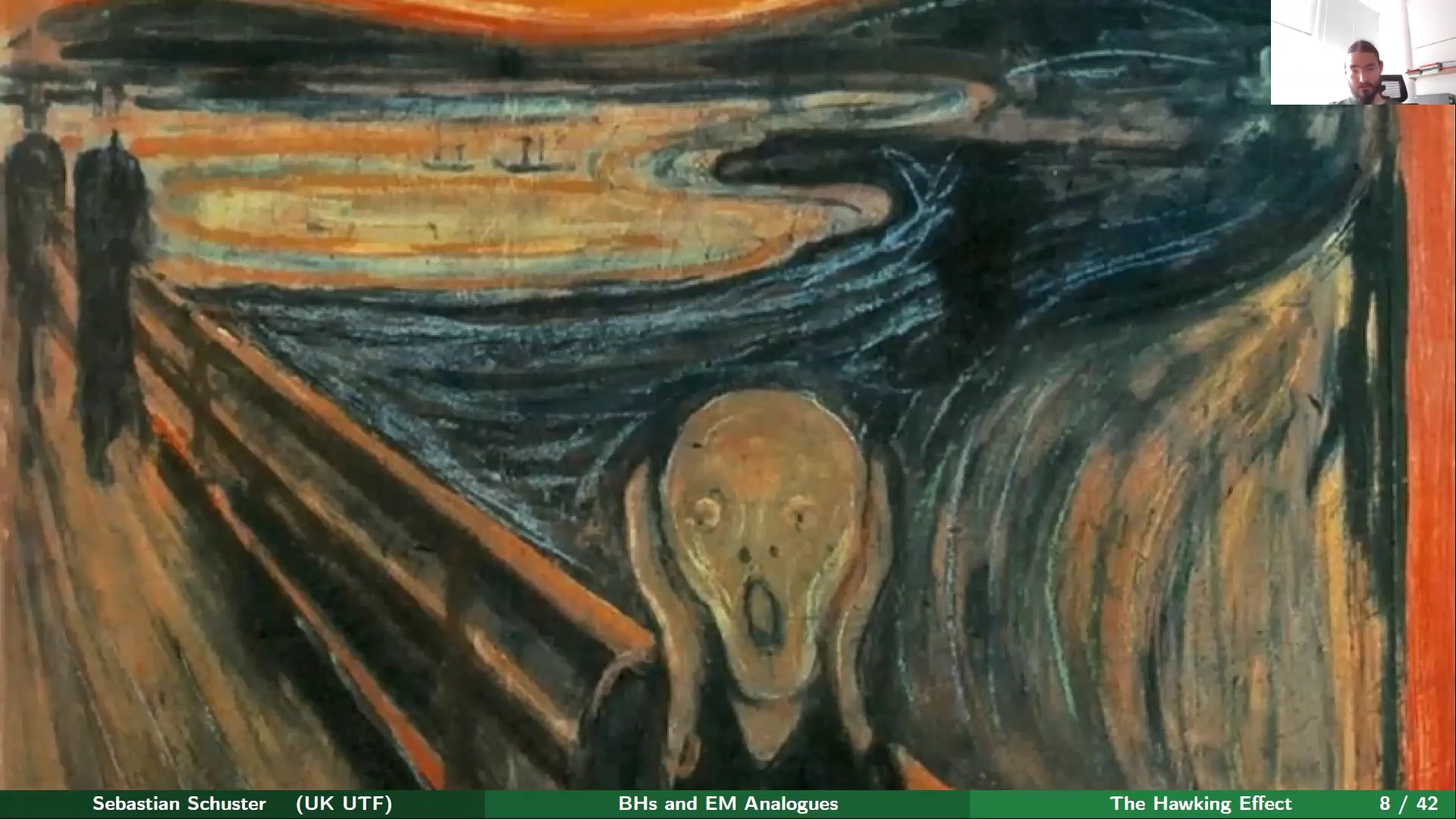 16. března 2021
Losing the trace of the Einstein equation
Mgr. Pavel Jiroušek
Central European Institute for Cosmology and Fundamental Physics, Institute of Physics, CAS
(seminář v angličtině)
We show that promoting the trace part of the Einstein equations to a trivial identity results in the Newton constant being an integration constant. As a consequence, the Newton constant becomes a global dynamical degree of freedom, which is subjected to quantization and quantum fluctuations. We investigate various equivalent forms of this modification and how they can be realized on the level of action principle. Surprisingly we find that one class of these realization also provide the Planck constant as an integration constant in a similar manner. 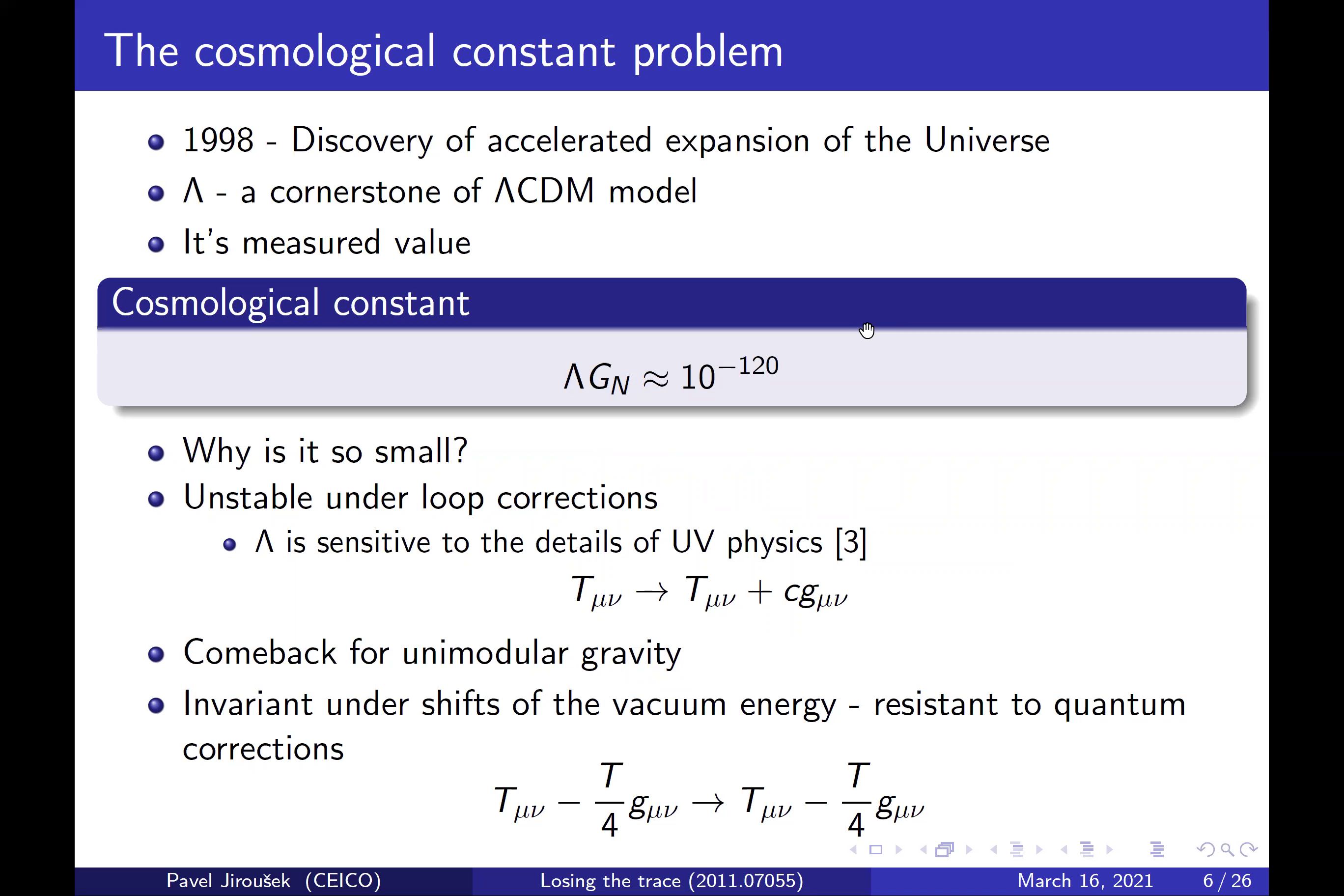 23. března 2021
Relativistic-jet formation in active galactic nuclei and gamma-ray bursts
Dr. Noémie Globus
ELI Beamlines, Institute of Physics, CAS / Flatiron Institute, New York
(seminář v angličtině)
I will discuss jet formation around Kerr black holes, with a focus on gamma-ray bursts (GRB) and active galactic nuclei (AGN) jets. For GRBs, two competing jet formation mechanisms have been widely discussed in the literature; magnetic extraction of the spin down power of a Kerr black hole (Blandford-Znajek process), and outflow formation via neutrino annihilation above the horizon. Models of BZ jets usually invoke the force-free limit and ignore plasma loading of magnetic field lines, whereas models of jets driven by neutrino annihilation are usually constructed within the pure hydrodynamic limit. In GRBs, however, both processes might be at work and I will show the interplay between them. For AGNs, I will discuss jet formation and collimation in M87 in light of the recent Event Horizon Telescope observations. 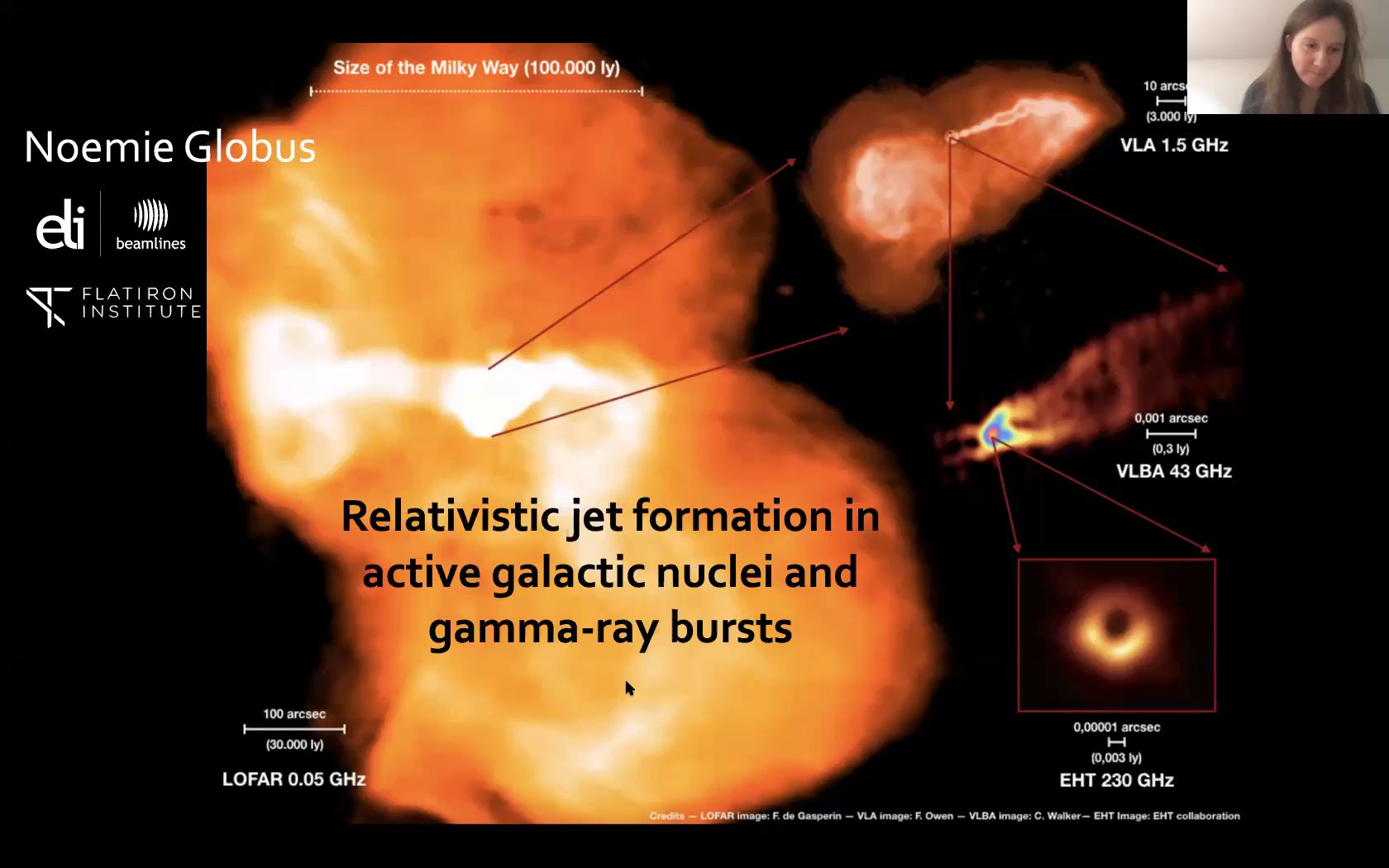 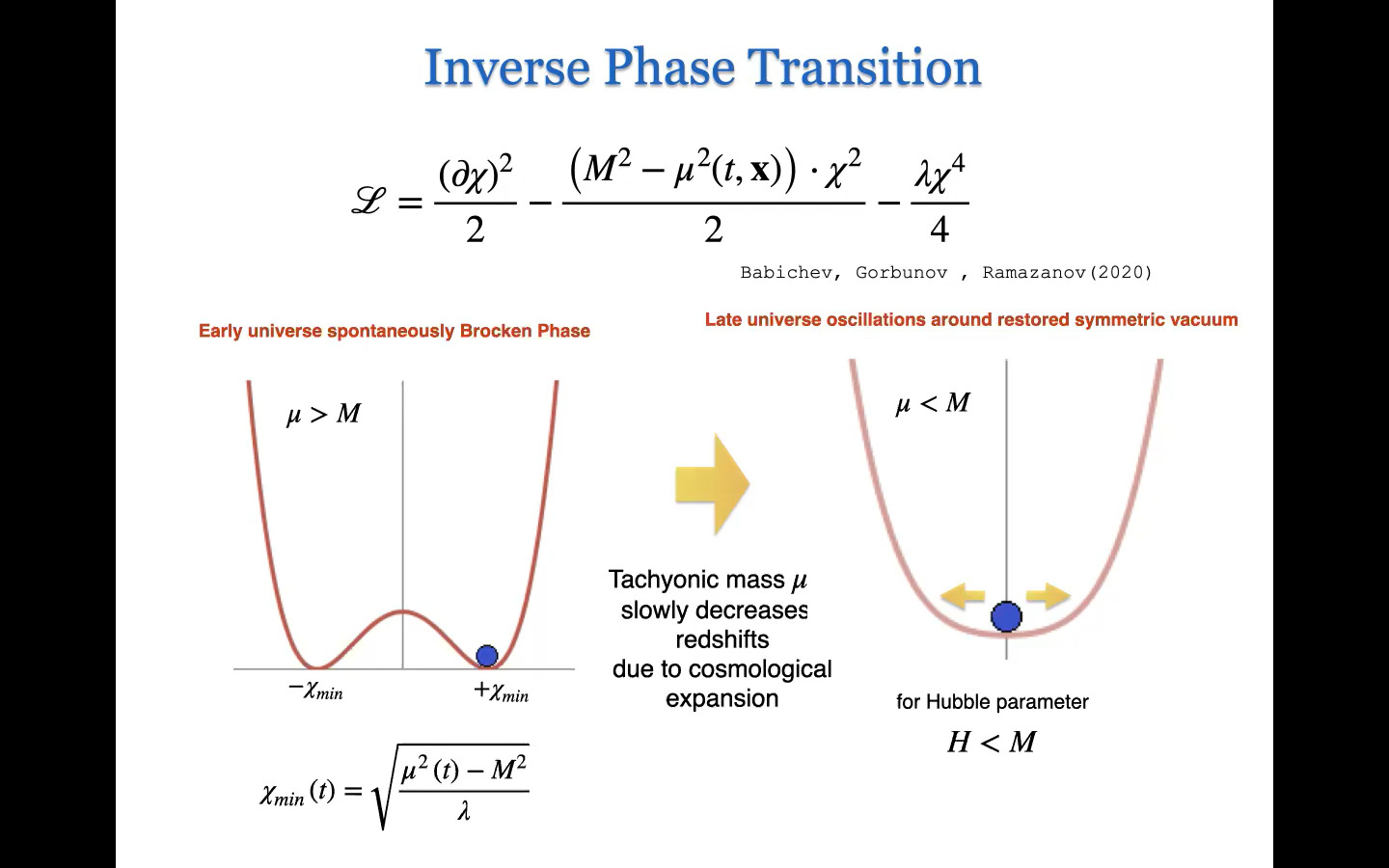 6. dubna 2021
The Debye potentials in GR, and reinterpreting the Meissner effect
Dr. David Kofroň
ÚTF
(seminář v angličtině)
I will shortly summarize the famous results of Teukolsky on perturbations of type-D spacetimes. Additionally, as an important and quite useful tool, I will introduce the Debye potentials for perturbations. These potentials are introduced for vacuum, but I will try to show how to include charge/current distributions in the case of spin s=1 test fields. I will also present some new explicit solutions and will try to reinterpret the Meissner effect occurring on rotating black-hole horizons in a different fashion than usual.

13. dubna 2021
AdS black holes sourced by intrinsically non-Abelian Yang-Mills matter
Dr. Daniel A. Flores-Alfonso
Department of Physics, Center for Research and Advanced Studies of the National Polytechnic Institute (CINVESTAV), Mexico City
(seminář v angličtině)
In this talk we consider Gauss-Bonnet (GB) theory in four and five dimensions. We present a new black hole in 5D and study its thermodynamics in the framework of extended thermodynamics of Lovelock configurations. Our main interest in the 4D case is the emergence of a reentrant phase transition coming from the GB sector. In each case, the matter content is an intrinsically non-Abelian Yang-Mills field with fractional charge. As might be expected, we find that the black holes are in the van der Waals universality class. 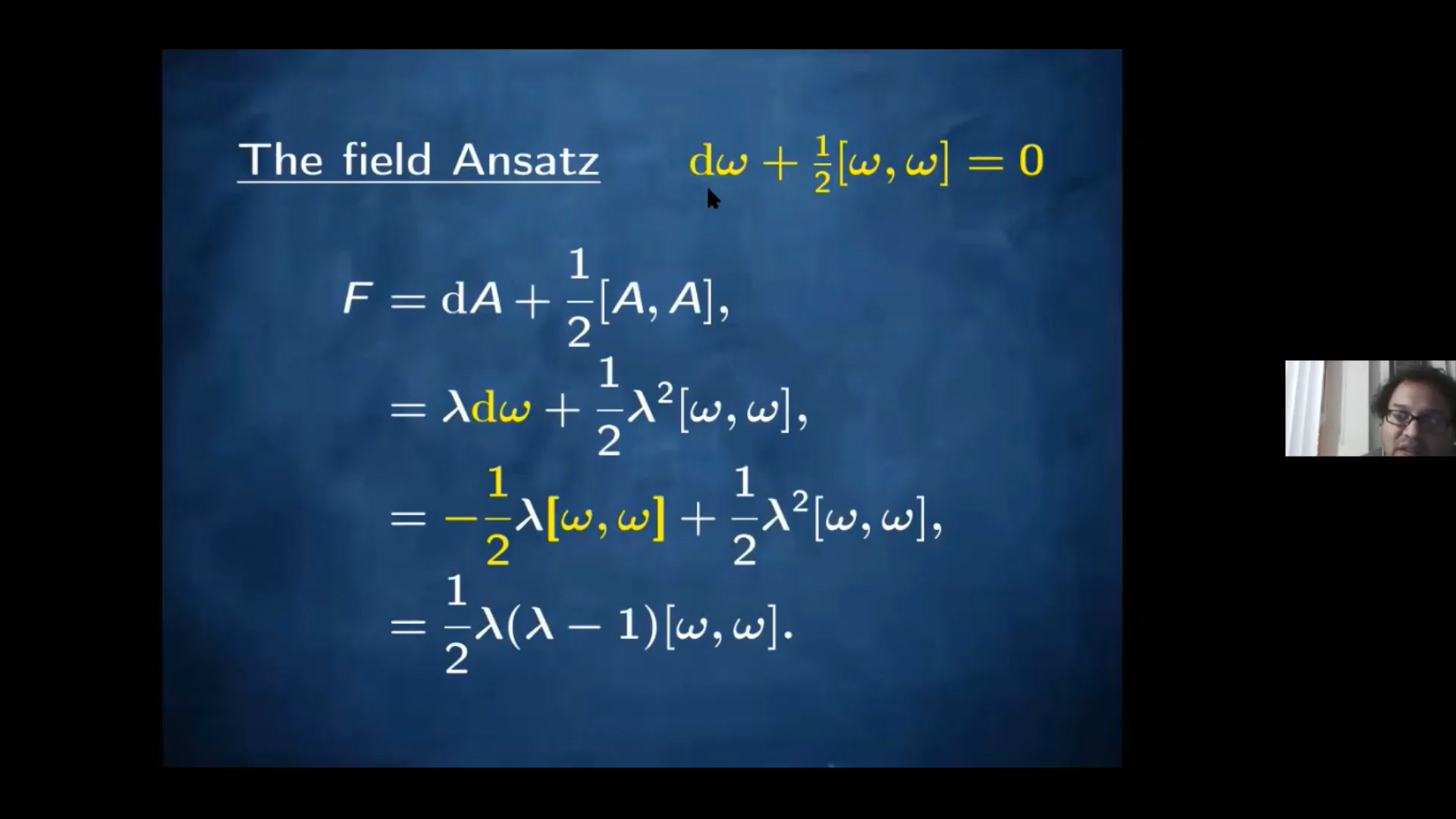