6. prosince 2022
The Dynamics of Apparent Horizons in a Black Hole Collision (Zoom talk)
Robie A. Hennigar
Department of Quantum Physics and Astrophysics, Institute of Cosmic Sciences, University of Barcelona
(seminįų v angličtinģ)
Apparent horizons are commonly used in numerical relativity to characterize the boundary of a black hole. While a theoretical understanding of the event horizons dynamics during a merger has been known for about half a century, significant progress on the corresponding problem for the apparent horizon has been occurring only very recently. In this talk, I will discuss the dynamical evolution of the apparent horizon as it is now understood. Time permitting, I will discuss how various behaviours for marginally outer trapped surfaces observed during the merger can be recovered by studying much simpler, isolated eternal black holes.

General relativity describes spacetime as a 4 dimensional Lorentzian manifold. The spacetime metric allows one to compute space and time separations between events in spacetime. However, general relativity is a classical theory, and it is not expected to be valid in scales where quantum effects become relevant, such as for distances of the order of the Planck length. In regimes where quantum field theory is valid, one can instead define spacetime separations through correlation functions of a quantum field. In fact, it has been conjectured before that the geometry of spacetime might be emergent from entanglement present in quantum fields. In this description the metric becomes effective, and can be seen as a consequence of the presence of a quantum field in the background spacetime. Moreover, these correlations can be accessed, so that one can rebuild the geometry of spacetime simply by performing quantum measurements on a quantum field.

Cosmic-rays are charged particles that have been accelerated to relativistic speeds. The general consensus is that the acceleration occurs in astrophysical shocks, with the particles gaining momentum as they repeatedly cross the shock front. In order to understand this process and determine which types of shock contribute to which part of the cosmic-ray spectrum, we need to run numerical simulations that incorporate both the large-scale shock structure and the microphysics of the interaction between charged particles and the local magnetic field. Here we introduce a combined particle-in-cell (PIC) and magnetohydrodynamics (MHD) code that combines the best aspects of both aspects into a single model. This allows us to run large-scale models of astrophysical shocks, incorporating both the particle acceleration process and the feedback of this process on the shock. From these models we can estimate how the characteristics of individual shocks influence their ability to accelerate particles and contribute to the cosmic-ray spectrum.

21. zįųķ 2022
!!! STŲEDA 15:45 !!!
Three-dimensional gravity on spaces with multiple boundaries
Prof. Marc, Baron Henneaux
Theoretical and Mathematical Physics Unit, Free University of Bruxelles
(seminįų v angličtinģ)
Three-dimensional gravity has no local dynamical degree of freedom. Yet, it is far from being trivial when the cosmological constant is negative. (i) It admits black hole solutions. (ii) It possesses remarkable asymptotic properties at infinity where an infinite-dimensional symmetry algebra emerges. These unique features make three-dimensional gravity a remarkable "theoretical laboratory" in which to explore in a simpler context various conceptual issues related to Einstein theory. The talk will first discuss general aspects of three-dimensional gravity. It will then focus on the question of (non-)factorization of the Hilbert space in the quantum theory when the spatial sections have multiple boundaries. (Prof. Henneaux also gives a lecture within the workshop Gravity&Prague 2022, on Friday, September 23, at 11:30.) 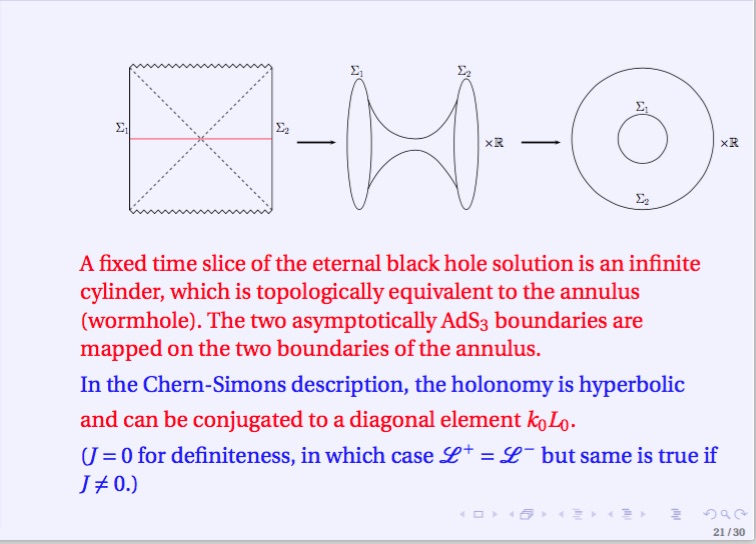 27. zįųķ 2022
!!! od 10:40 !!!
Spacelike (cosmological or black hole) singularities
Prof. Marc, Baron Henneaux
Theoretical and Mathematical Physics Unit, Free University of Bruxelles
(seminįų v angličtinģ)
The BKL analysis of the generic behaviour of the gravitational field near a spacelike singularity will be reviewed. Its modern reformulation in terms of hyperbolic billiards and Weyl groups of hyperbolic Kac-Moody algebras will be presented. The analysis will cover pure gravity in four spacetime dimensions, as well as higher dimensional models with matter fields (some of which are relevant for a holographic description of superconductivity). 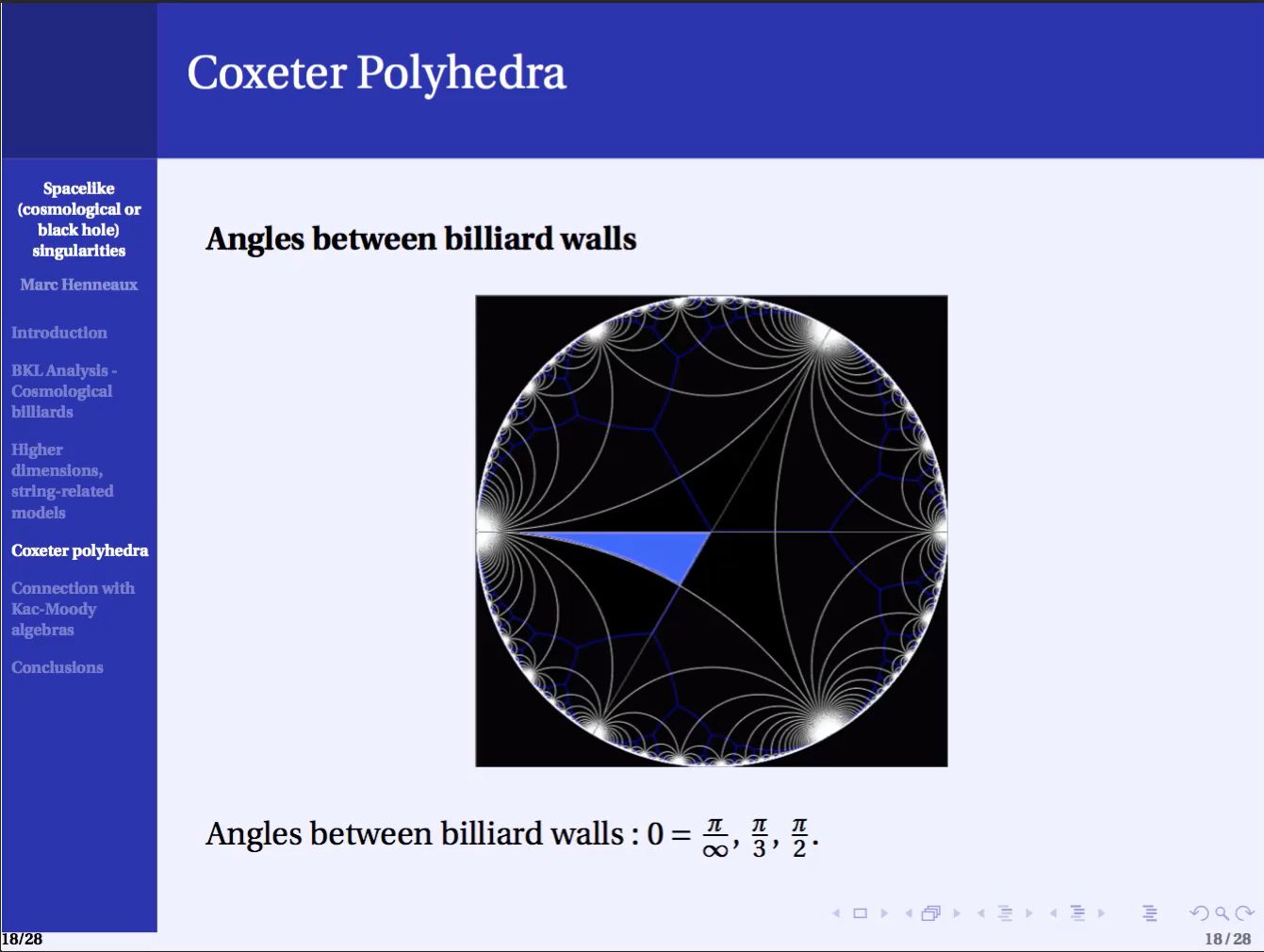 11. ųķjna 2022
Universal Einstein-Maxwell solutions
Dr. Marcello Ortaggio
Department of Algebra, Geometry and Mathematical Physics, Institute of Mathematics of the Czech Academy of Sciences
(seminįų v angličtinģ)
Certain classes of Einstein spacetimes are known to be "immune'' to higher-order corrections, i.e., they are simultaneous solutions of (virtually) any modification of Einstein's gravity in vacuum. In this talk we report on recent progress for the case of Einstein-Maxwell solutions, for which one has to consider also the backreaction of the electromagnetic field as well as corrections to the Maxwell equations. After giving a characterization of (at least some) universal Einstein-Maxwell solutions, we exemplify the obtained results in the case of particular theories such as ModMax or Horndeski electrodynamics. 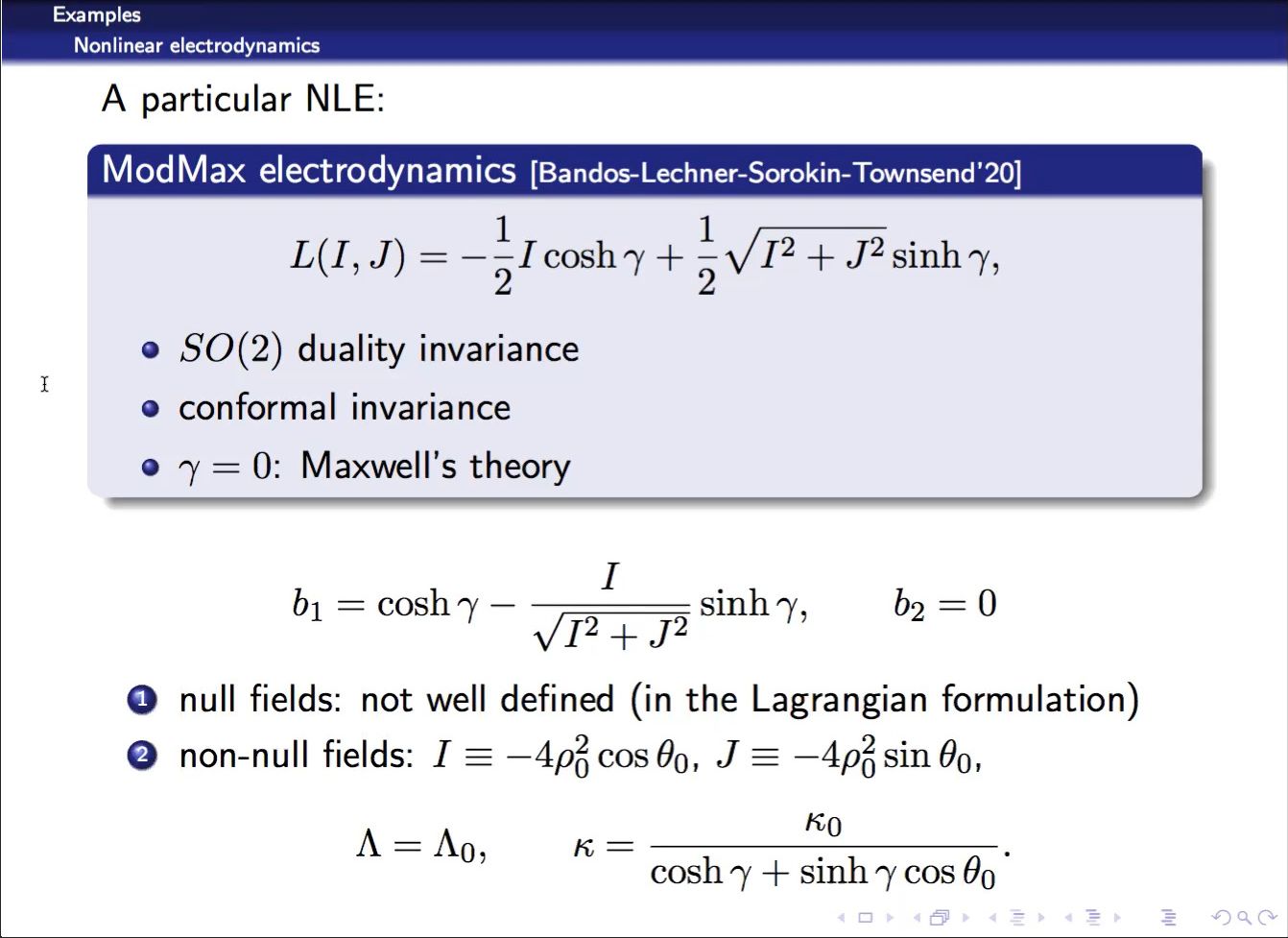 18. ųķjna 2022
Stories from the realm of extended test bodies
Dr. Georgios Lukes-Gerakopoulos
Prague Relativistic Astrophysics group, Astronomical Institute of the Czech Academy of Sciences
(seminįų v angličtinģ)
We shall discuss mainly results which have appeared in arXiv:1907.05659, arXiv:2104.11183 and arXiv:2206.11149. The first tackles the issue of whether an extended body can move on geodesic trajectories in a black hole spacetime background. The other two works look into equatorial circular orbits of extended bodies in the pole dipole approximation and show that in curved backgrounds the centroid choice is not a gauge. 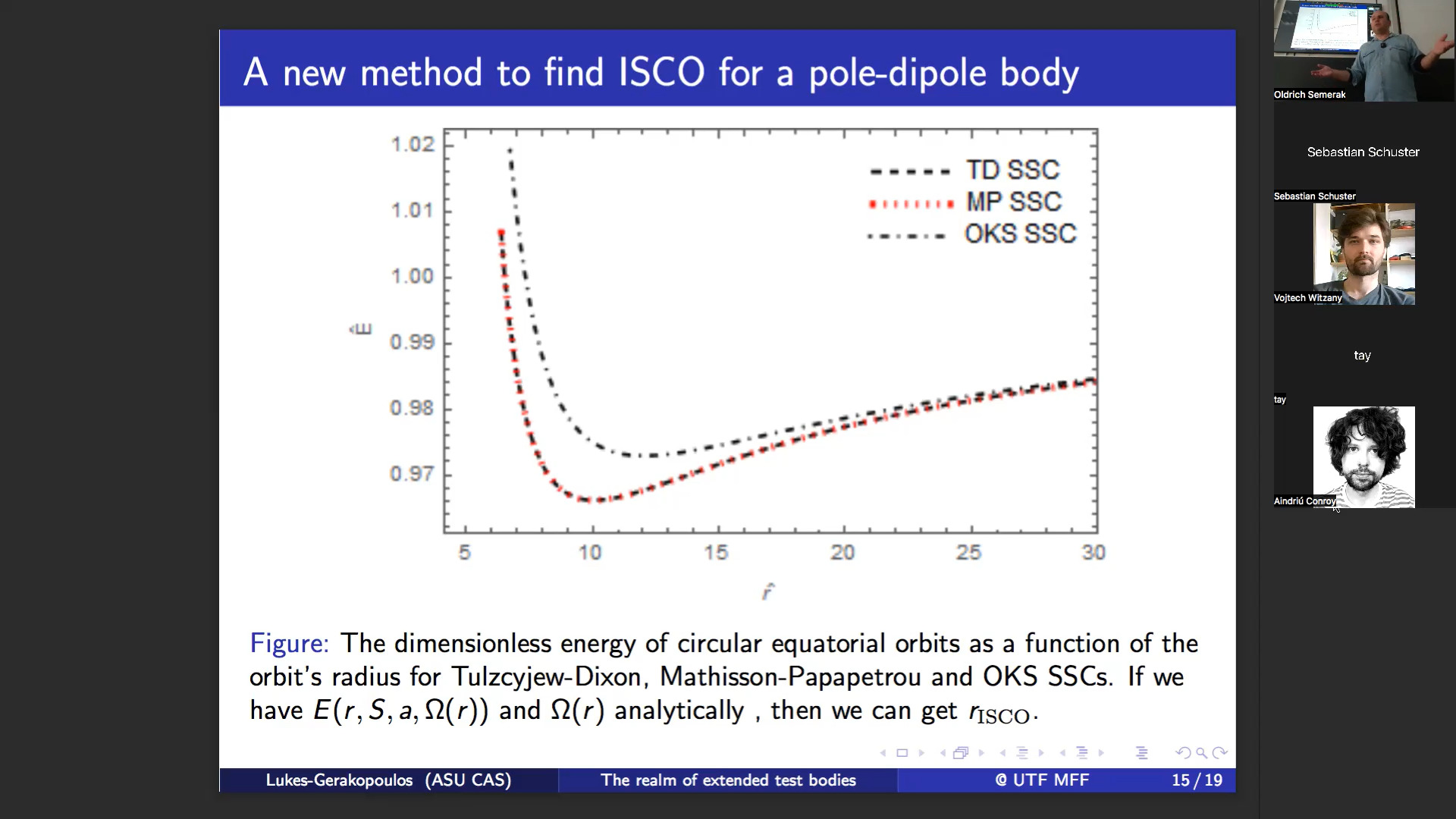 25. ųķjna 2022
Resonances in gravitational-wave inspirals
Dr. Vojtģch Witzany
Relativity group @ University College Dublin
(seminįų v angličtinģ)
Inspirals of compact objects due to gravitational radiation are the central sources for gravitational-wave detectors. The inspirals we have seen so far have had reasonably simple dynamics. However, upcoming gravitational-wave detectors will extend our reach and start seeing complex precessing and eccentric inspirals. An especially worrying feature of those will be resonances, moments when frequencies of the system become interlocked in integer ratios and the nature of the motion unexpectedly changes. I will discuss how these can be treated in a semi-analytical scheme and our progress in practically doing so. 1. listopadu 2022
Pųednįka pųes Zoom
The propagation time delay for pulsars orbiting a supermassive black hole
PD Dr. Eva Hackmann
The Center of Applied Space Technology and Microgravity (ZARM), University of Bremen
(seminįų v angličtinģ)
Pulsar timing offers excellent capabilities to test the theory of gravity in the strong field regime. Particularly promising laboratories for such tests are pulsar  black hole binaries, and the search for pulsars closely orbiting the supermassive galactic center black hole is ongoing. Complementary to the post-Newtonian approach commonly employed in pulsar timing, here the test particle approximation provides another useful ansatz.
We present an analytical expression for the propagation time delay of lightlike geodesics in a Kerr spacetime, including the post-Newtonian Shapiro and frame dragging delays as well as effects due to the multipole structure of the Kerr black hole. As an specific example we discuss in detail the most extreme case of an equatorial egde on pulsar orbit and compare our results to the usual post-Newtonian expressions. 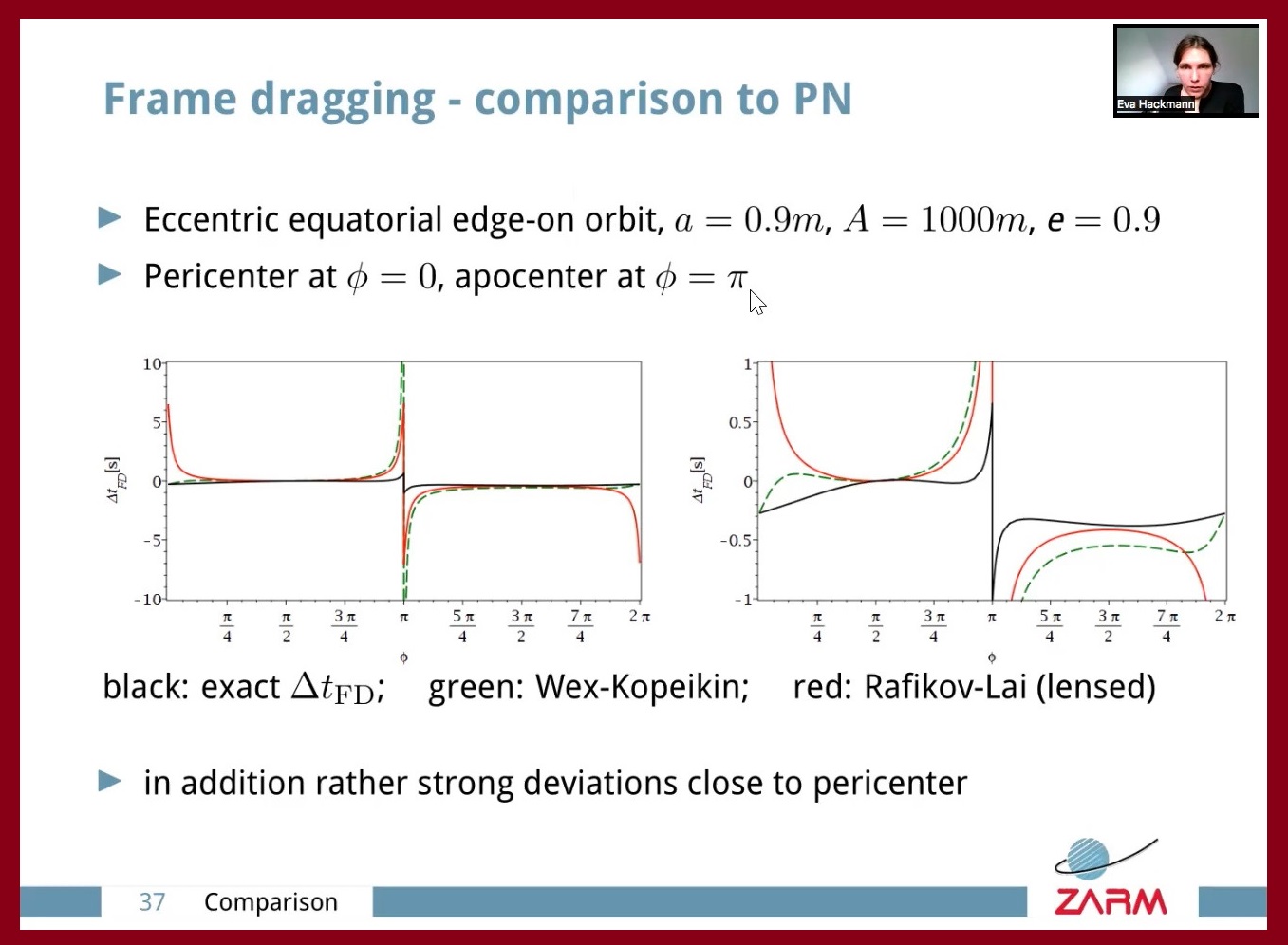 8. listopadu 2022
Pųednįka pųes Zoom
Generic orbits of spinning bodies around Kerr black holes
Lisa Valerie Drummond
MIT Kavli Institute for Astrophysics and Space Research, Massachusetts Institute of Technology
(seminįų v angličtinģ)
Accurate models of large mass-ratio black hole binary systems must include post-geodesic corrections which account for forces driving the small body away from the geodesic. The spin-curvature force, which arises due to the coupling of a test bodys spin to the spacetime curvature, is an example of a post-geodesic effect. We have developed a frequency-domain approach that precisely describes the orbits of spinning bodies around black holes. In this talk, I first show how we apply this approach to nearly-equatorial orbits (presented in arXiv:2201.1334). I then show how to use our method to characterize the behavior of fully generic spinning-body orbits, which are both inclined and eccentric and have the small body's spin arbitrarily oriented (described in detail in arXiv:2201.1335). The small bodys spin shifts the frequencies which affect orbital motion and these frequency shifts change accumulated phases which are direct gravitational-wave observables. A catalog of these frequencies and how they vary with the parameters describing orbits is therefore likely to be of use as waveform models for large mass ratio systems are developed. Next, I present fully generic spinning-body inspirals that include both the backreaction due to gravitational waves and spin-curvature forces, computed using an osculating element integration scheme (these inspirals omit some key elements which I will discuss in my talk). Finally, I present preliminary results (i) applying a near-identity transformation (NIT) which eliminates dependence on the orbital phases, allowing for very fast computation and isolation of the secular effects, and (ii) computing the corresponding gravitational waveforms. 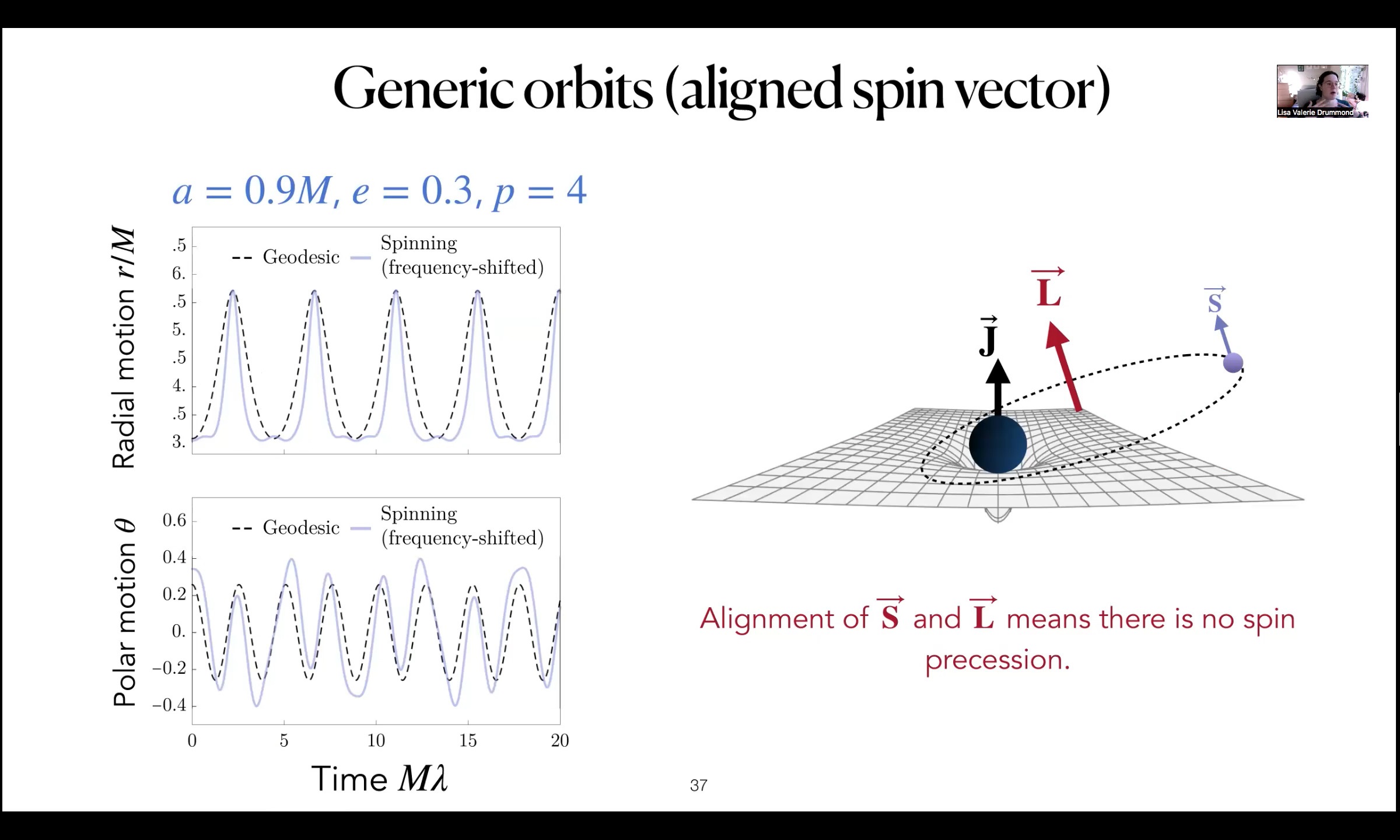 10. listopadu 2022
First few overtones probe the event horizon geometry
Dr. Roman Konoplya
Institute of Physics, Silesian University in Opava
(seminįų v angličtinģ)
It is broadly believed that quasinormal modes (QNMs) cannot tell the black-hole near-horizon geometry, because usually the low-lying modes are determined by the scattering of perturbations around the peak of the effective potential. Using the general parametrization of the black-hole spacetimes respecting the generic post-Newtonian asymptotic, we will show that tiny modifications of the Schwarzschild/Kerr geometry in a small region near the event horizon lead to almost the same Schwarzschild/Kerr fundamental mode, but totally different first few overtones. Having in mind that the first several overtones affect the quasinormal (QN) ringing at its early and intermediate stage [M. Giesler, M. Isi, M. Scheel, and S. Teukolsky, Phys. Rev. X 9, 041060 (2019)], we argue that the near-horizon geometry could in principle be studied via the first few overtones of the QN spectrum, which is important because corrections to the Einstein theory must modify precisely the near-horizon geometry, keeping the known weak field regime. We discuss the connection of this observation with the so called "overtones' instability" recently studied in [J. Jaramillo et. al., Phys. Rev. Lett. 128, 211102 (2022)]. 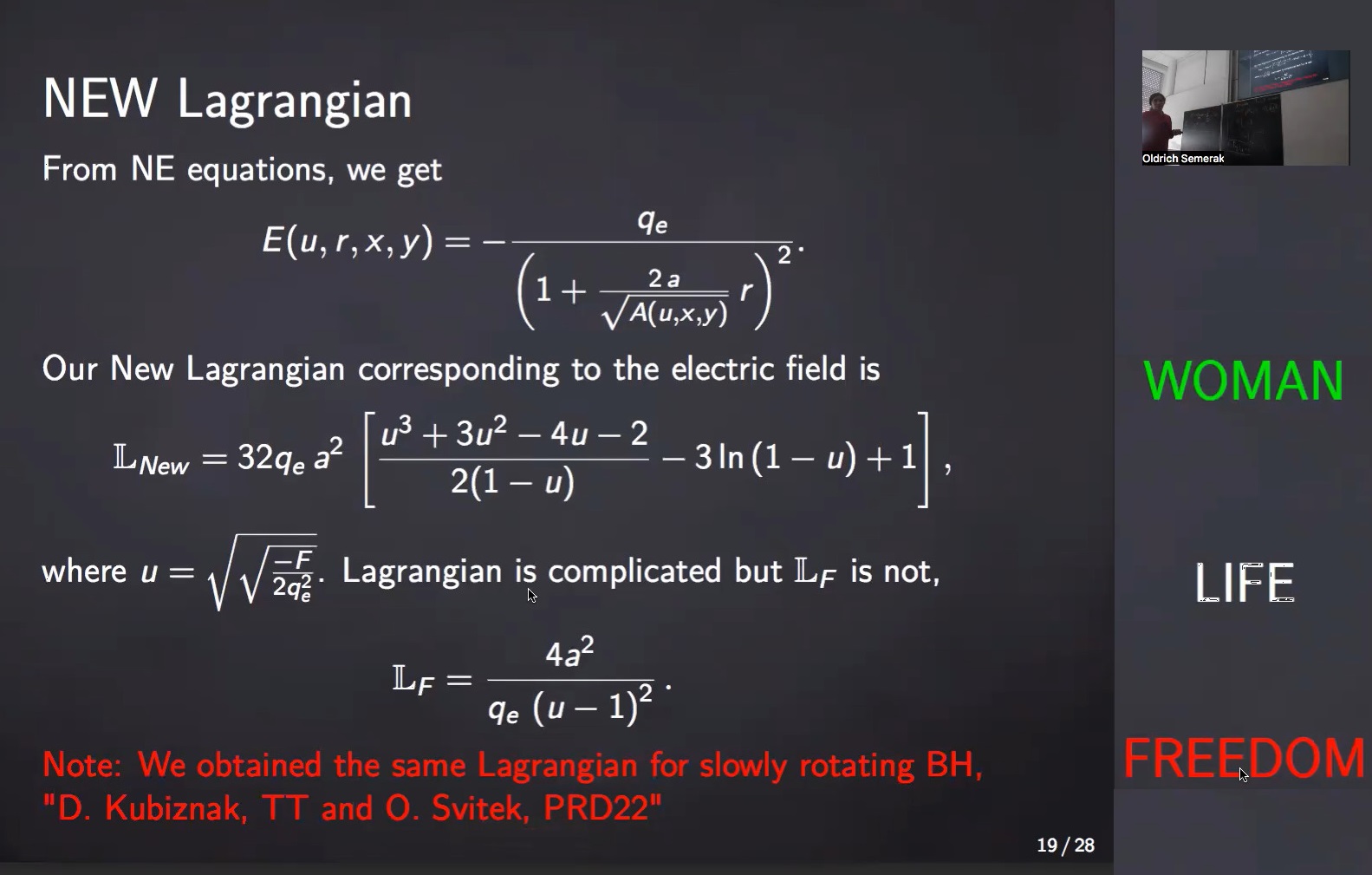 22. listopadu 2022
Generalizations of classical relativity theorems
Dr. Eleni-Alexandra Kontou
Department of Mathematics, Faculty of Natural, Mathematical & Engineering Sciences, King's College London
(seminįų v angličtinģ)
Several classical relativity theorems, including the famous singularity theorems, have in their assumptions pointwise energy conditions. Those conditions bound the energy density (or similar quantities) on every spacetime point and are easily violated by quantum fields. One way to examine the applicability of those theorems in semiclassical gravity is to replace them with an averaged version, where the energy density is bounded on a segment of a causal geodesic. The index form method, used instead of the Raychaudhuri equation, provides a direct way of using those weakened conditions. In this talk I will apply this method to the Penrose singularity theorem and the Hawking area theorem and present progress and challenges for both. 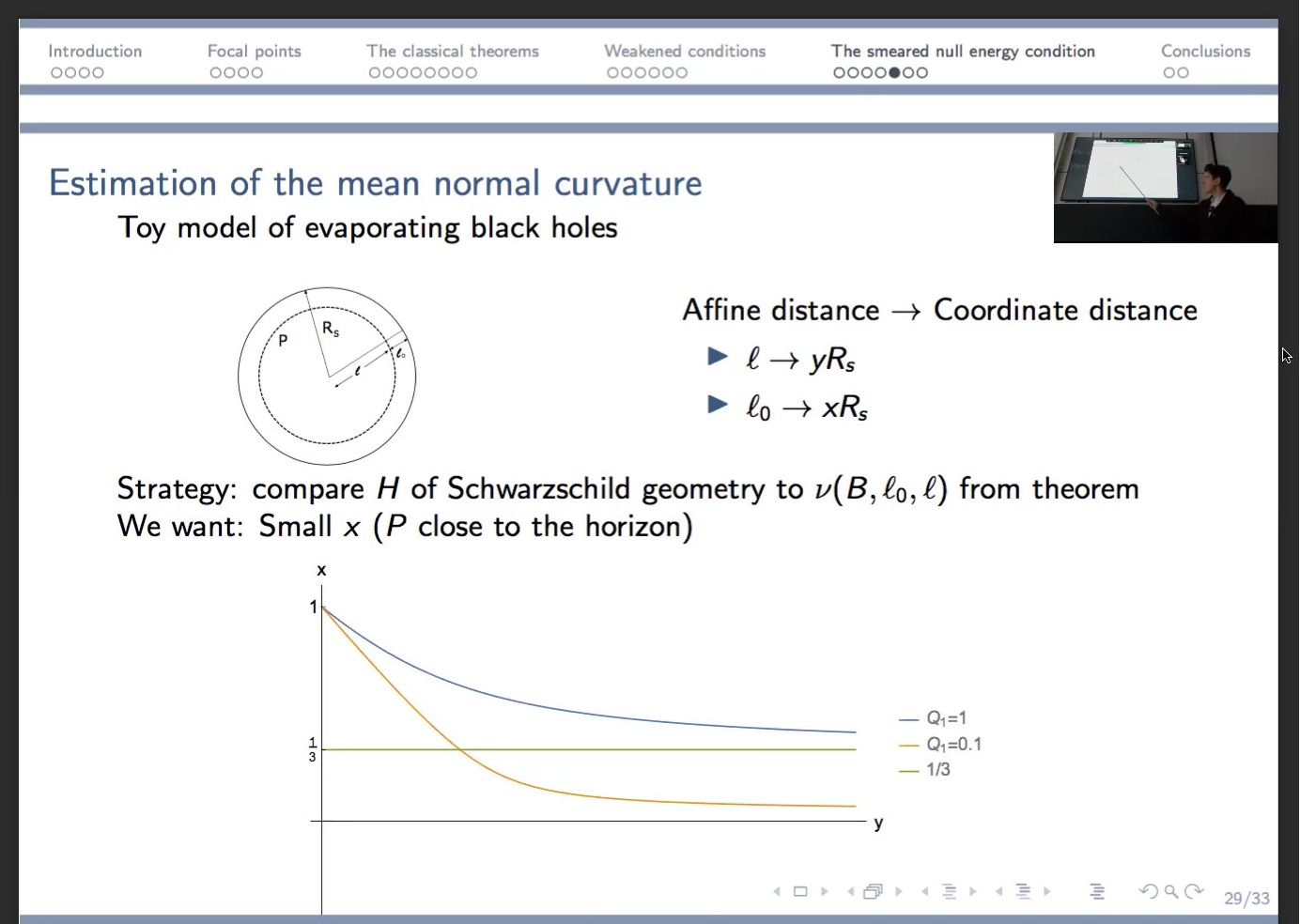